A CONVERSATION WITH BESS by Jane Waggoner Deschner 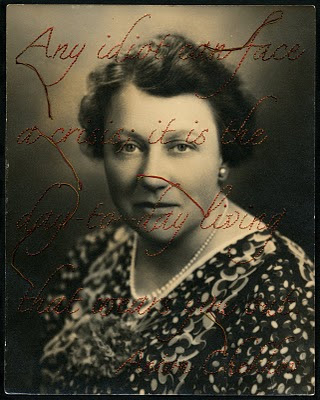 ANY IDIOT CAN FACE A CRISIS, IT IS THE DAY-TO-DAY LIVING THAT WEARS YOU OUT....ANTON CHEKHOV
Me: Excuse me, ma’am. May I talk with you?

Her: Who are you?

M: I'm the artist who found this photograph of you. I rescued it, actually. Then I used it to make an artwork.

H: Me, an artwork? How do you make art out of my old photo?

M: First, I find it. Then I look at it and decide what I might be able to "say" using this--er, your--image. One of the things I do in my practice is embroider sayings of famous people into studio portraits made by unknown photographers.

H: You've changed me. You have pierced my image. You've taken me away from those who know me.

M: Yes, I have. Tell me about the day you had this photo taken.

H: I'll tell you about that if you tell me what you think you are doing.

H: My name is Bess. I had this photo taken as a present for my husband Herb's birthday. I went to the photographer and told him that I wanted a picture of myself for my husband's desk at the bank. I think he (my husband, not the photographer) eyes the young women too much--I wanted to remind him of his "other responsibilities."

The pearls I'm wearing were a 10th anniversary present from Herb. He gave me the earrings when we got married. You can't tell from the photo but the dress is shades of periwinkle blue and white--the blue matches my eyes. He always used to say that he loved my clear blue eyes. When I was young, I used to have the creamiest white skin.

The day I went to the studio, I was nervous to pose in front of the camera. I'm not usually one who takes center stage, but I had something to say to Herb and a photo seemed the best way to do it. The photographer assured me that he would take a series of photos and I could pick from the proofs the one liked best.

M: How did you decide on this particular photo?

Bess: I liked the way the light was on one side of my face and the other side of my hair. I'm looking up, just barely, but I appear to be thinking. I didn't like the proofs in which I was grinning. I'm not a silly person and I don't want to look like one. I'm not beautiful anymore, so I wanted to look like I had character.

So now you tell me why you chose this picture and stitched words through it.

M: I work with vernacular photographs; pictures taken by unknown photographers. I'm interested in uncovering/discovering commonalities of our shared humanity. (I hope I don't sound too pretentious.) It seems that we humans look more easily for differences among us--the things that separate us--than we do for the things that bring us together. There is the common and very widespread human tendency to want one's picture taken and to take pictures of people, places and times we want to remember. We want some evidence of our existence. By accumulating and sifting through these, I find ways of photographing (as shown in kinds of photographs) that many individuals in a variety of times and places have done. I hope, that by presenting these in interesting, creative ways, viewers will look at the photos of themselves and other un-famous people with a new interest--as part of a larger whole, a bigger family. Does that make sense to you?

B: Yes, I think so. I'm not that different from my friends. I guess there are women like me in other small towns in other places. They probably don't want their husbands eyeing younger women either.

M: Probably not. But I don't think they would understand, from looking at this photo of you, that that is why you had it taken. But as Susan Sontag wrote, "Photographs, which cannot themselves explain anything, are inexhaustible invitations to deduction, speculation, and fantasy." There is purpose, a personality, in your gaze. Your clothes, jewelry and hair say something about you, about your "position" in life. But in these kinds of studio images, there isn't the milieu, the spontaneity, that snapshots have, which offers the viewer clues about the impetus for the photo to have been snapped. You have chosen this photo of yourself because it presents you very well--you look better than you do on an average day--it's calculated and posed. And so, less interesting for people who don't know you and can't compare the photograph to the "real thing."

It's these kinds of photos that I add words from the famous to. In your case, I used a Chekhov quote: "Any idiot can face a crisis; it is the day-to-day living that wears you out." I want my art to say something--I want to say something through my art. If I am going to spend my time creating/working on something, I want it to provoke viewer's thoughts about life and living in some way. Famous people often say things more articulately than I can. Plus a famous name gives the statement more credibility. People will pay more attention to what Dwight Eisenhower or John McCain have to say about war than Jane Deschner, even though I might use the same words. Their quotes and your picture, you, give the art object a spectrum from famous to common. Am I making sense?

B: You use my photo as a symbol for women, even people, like me.

B: How do you choose the quotes?

M: I turned 60 this year. I've also lived longer than my mother and been healthy longer than my father. My younger sister is dying. I feel an urgency in living. I can share things in quotes I find that I believe and feel. Within this maxim series, I've developed "mini-series" I guess you have to call them. One mini-series used quotes that all related to "war and peace." Another about "love." I want to do another one with the words coming from children. Many of them, like this one, share my thoughts about aspects of living in general.

B: It seems like a lot of work to stitch the quote into the photograph.

M: It is. But, it's work that I enjoy. I love what I can do with my computer, but at the end of the day, what centers me is working directly with my hands. It's not the same as through a keyboard. Also, I believe that for all the immediacy of a photograph (the almost instantaneous recording of the light emanating from a subject at an instant in time [±Barthes]), there is a distance inherent in it as an art medium--no hands manipulating clay, paint or pencil. By hand-embroidering, I am inserting my hand--me--directly and obviously into the art making process. You can see my touch in the final artwork. Needle-in-hand is an age-old women's craft, as well. I feel comfortable joining those generations of craftswomen.

B: I like to crochet so I know what you mean. Earlier I said that you have taken "me" away from people who know me. Do I belong in an art gallery?

M: That's another part of this process. Remember, I'm pointing out commonalities in humanity. Putting this embroidered photograph into a gallery raises its value, broadens its scope. It's in a frame; it's on the wall; it's signed by an artist; it's an artwork. People now regard it differently--I hope in all the ways I've shared with you above.

So, what do you think now about what I've done with this photo of you?

B: You have done a beautiful job of embroidering. I think you have chosen a beautiful script to use and rich colors of thread. They go with the ambient coloration of my photo. I'm not sure about the hanging threads, but they must be there to "loosen it up." I like that I'm representing a part of humanity. I believe we should be kind to one another. Do you think people can see that? I'm happy that this photo is not lost--it means I'm not forgotten. You don't have to know that I'm "Bess from small town USA" to feel something about me--well, actually about all whom I'm representing. I think I'm understanding this art thing! I'm glad that we're working together.

M: Did Herb stop eyeing the younger women at the bank after he received his birthday present?

B: No, I really didn't think he would. We've been together a long time; I know he loves me. He just likes to look and fantasize. Don't we all?

M: I certainly do. That's why I love these photographs.

B: The one thing I'm not so sure about though. How would Chekhov feel about being associated with the likes of us?

The piece is in the collection of Sharon Dynak at Ucross Foundation in Wyoming.

Click here for more on Jane Waggoner Deschner and other Guest Contributors
Posted by Stacy Waldman at 3:40 PM