A LAWSUIT, PHOTOGRAPHY, AND AN IRONIC ENDING by Jimmy Leiderman

It's 1906 in Auburn, New York.
Herbert Phayre, an Indian-born photographer, had established his studio in Auburn 6 years earlier, when he arrived from Canada and instantly became a frequent advertiser in local newspapers. Business was good. 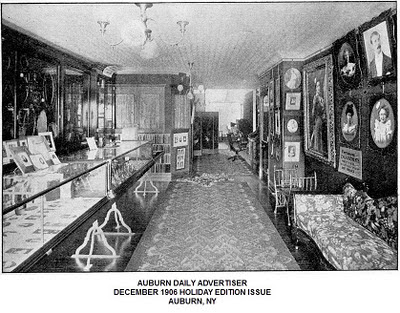 Willard Hoagland, a well-built 5'11" and 170 pound man, originally from Union Springs, New York, was already a known figure in the running track and sporting circles after starting his athletic career in 1879. Hoagland's interest in sports went as far as umpiring major league baseball games in 1894.
Hoagland, now a 44 year old who was known as the 'Champion Heel and Toe Walker of the World,' decided to make a few extra bucks.
Image marketing by selling souvenir photographs at a track meet was not something new, as it had already paid dividends to other athletes.  So why not test the market by working out a deal with Phayre's studio, the most prominent photographer in the city?
Hoagland visited Phayre and agreed on a package of 1,100 photographs at 2 cent each.
Below is the finished product and main object of the commercial dispute that followed the photo shoot. 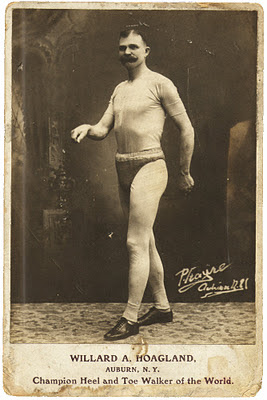 By April of 1906, Phayre had obtained a judgment against the athlete in the amount of $26.60 (about $665 today) after Hoagland decided to 'walk away' from paying the photographer. 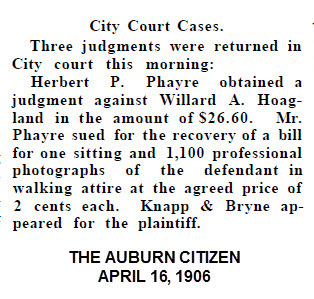 It comes as no surprise that local newspapers began to cover the news. Auburn had a population of about 30,000 by that year, so a legal feud between two of it's prominent citizens had to be the talk of the town.
Hoagland declared that he offered to do the 'square thing' with the photographer and pay for all the photographs that had been sold and return the rest to Phayre, even though the original agreement (according to him) was that the photographs were not to be paid for until completely sold. 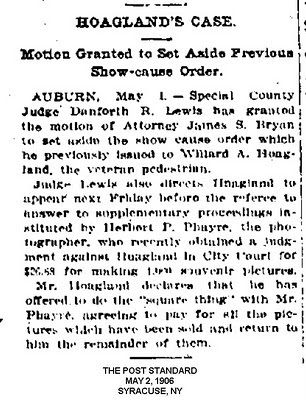 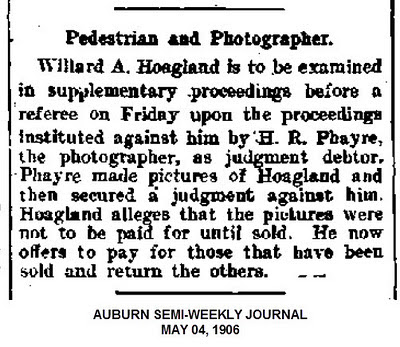 A little more than 100 years have passed since the incident and it is not known how the dispute was resolved.
Phayre kept doing business as usual until his death in 1938. His business didn't become a casualty of the Great Depression and he even survived a 1931 fire that consumed his studio and nearly took his life. He lived for 68 years.
Hoagland put away his walking paraphernalia in 1912. After his retirement from the tracks, Hoagland served as a constable of the city of Auburn and even as Deputy Sheriff. He went on to be NY State's Game Protector for more than 20 years. He died in 1936 at the age of 74.
Both Phayre and Hoagland rest in Auburn's Fort Hill Cemetery just a couple of yards away from each other.
This guest blogger ended up buying one of Hoagland's photographs for exactly 1000 times the original price agreed by both him and Phayre back in 1906.
They must be laughing right now.
For more info on Jimmy Leiderman, click here.
Posted by Stacy Waldman at 10:04 AM 2 comments: