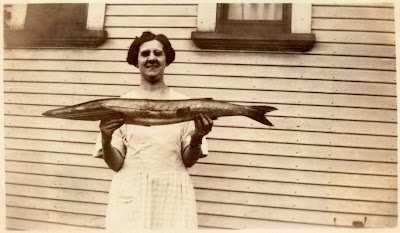 “And the lion shall lie down with the lamb…” we've been told. It happens every day to any photography dealer who is also a collector. The dealer buys lots and lots of photographs and tries to find a good home for them. That's the lamb part. Then the collector inside the dealer growls like a hungry lion and says, "I want that". How can a dealer also be a collector and not be directly competing with his or her clients for the good material? 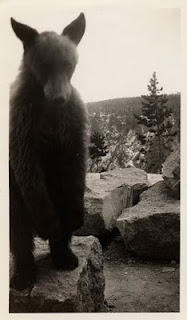 One way would be for the dealer to collect something useless, insignificant and poetic. How about snapshots within a very narrow category that don't have a high monetary value, are common and yet endlessly fascinating. That's the story behind the Vernacular Bestiary. 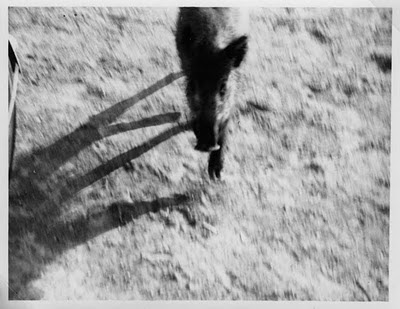 It didn't take me very long to notice that one of the rooms in our house had been gradually decorated mostly in animals in some form or another. There was a lot of band saw art and some pull toys and scientific prints and documentary photography and snapshots all resting on bookshelves and filling the walls above them. I began to contemplate the concept of a bestiary. 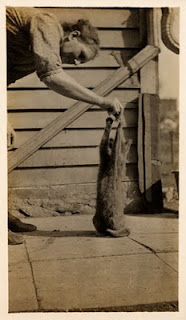 During my time as a new and used book dealer I noticed there were a lot of books with animals in them. People do love their animals and buy books about them. Books on cats and dogs and horses are common. Bird books are useful to have around. Some books contained antique photos or reproductions of various animals. What I did not see was a book of photographs of animals made up of only snapshots. The wheels in my mind began slowly turning. After some grinding of wheels I made the first step into a minor compulsion. I registered the domain name www.vernacularbestiary.com. Don't bother looking, it's inactive. I only have so much time for my compulsions. It's parked while I'm out gathering more photographs for the Vernacular Bestiary. 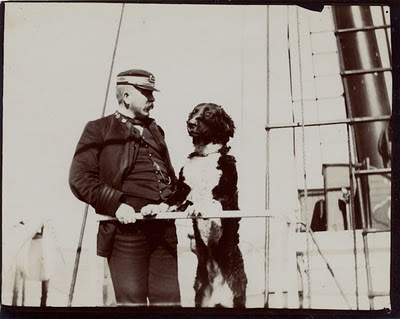 A bestiary is not a zoo or a farm or an actual place. Everything in a this bestiary must be a trace of an original animal (both imaginary and real). Tracing with light produces a photograph. Tracing the image of an animal with light would be a photograph of an animal. If that photograph was taken without artistic intent, by a member of the class of humans called "The People", with primitive equipment and processed by simple means like a drugstore or home sink, then that photograph could be considered to be Vernacular. No professionals need apply. 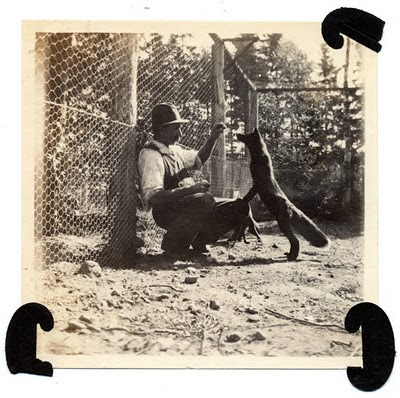 The filing system of the VB has slowly evolved. I use 3-ring binders for storage. I cut a piece of acid-free mat board to 8 1/2 by 11 inch size but a little less to allow for easy insertion into clear plastic, heavy duty Top Loaders from the office supply store. Now I've got a sort of envelope to store the constantly growing VB. It seemed logical to start placing the animals in alphabetical order. If I got a few more bears, for instance, I could easily add a new top loader to the binder and mark that section bears.   Looking at the VB in its entirety made patterns visible. I began to try to get one animal for each letter of the alphabet. I would call that an Alphabetary. Within the VB is an Alphabetary. The VB is what it is but the Alphabetary is currently incomplete. Egret, flamingo, gerbil, hedgehog lead to lacuna at the letter I. I still need a snapshot of an ibex, iguana, impala or any other animal starting with I. The rest of the missing letters are N, U, V, X and Y. Z is obviously covered by our striped friend Mr. Zebra. 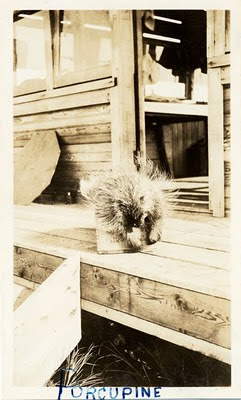 There were also several particular animals I found difficult to collect. Vicious, nocturnal animals topped my list. Fellow collectors and dealers came to the rescue. Robert Jackson brought me a huge bat, a running boar and a porcupine. From Erin Waters came a double exposure of a buck. 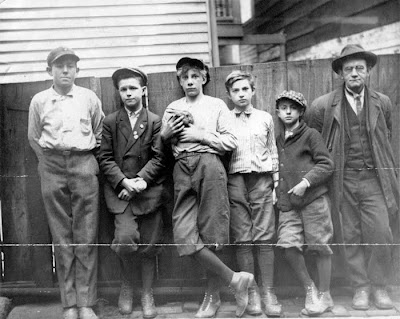 I made up business cards on the computer and hand them out. They say, "Do You Support The Vernacular Bestiary?"   I've posted some of the VB on my Facebook page and on Flickr. My constantly under construction web site is www.johnnicholsgallery.com.  Wonder what will happen next?
Phone: 805-525-7804
Business Email: john@sespe.com
http://www.johnnicholsgallery.com
(Mail: POB 268)
Santa Paula, CA 93061
Facebook: http://profile.to/johnnichols/
Blog: http://sespe.wordpress.com/
Snapshots: http://www.flickr.com/photos/mrnichols/

Posted by Stacy Waldman at 1:13 PM No comments: 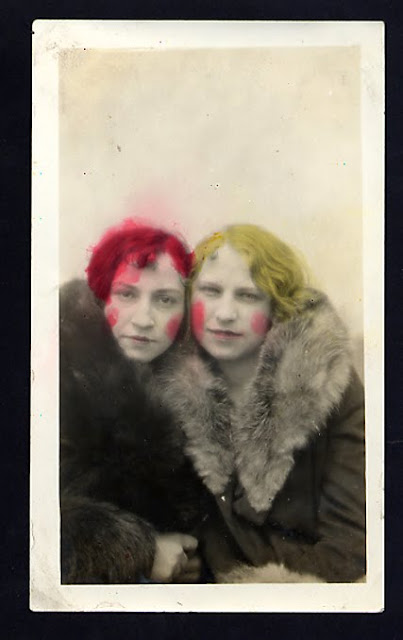 Snapshots of faces are seductive as well timeless and universal in what they impart to the viewer.   And if you don’t know the person, you are not associating some flaw in their physical or emotional makeup with seeing their likeness in a photo.  You are not remembering some insult, or thinking about a bad time you had with the person.  Such distance enables you to simply gaze into the person’s eyes, marvel at the attractiveness of a gentleman’s features, or swoon at a woman’s beauty. 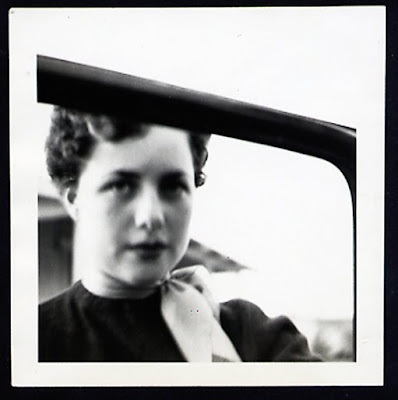 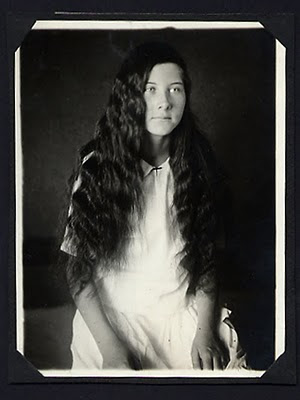 And these are not portraits as taken by a professional photographer, but rather photos clicked by friends and family.  Therefore there is often an ease and naturalness in the photo subject that you don’t see in regular portrait photography.   And there is often little care taken in lighting effects and such.  This is because the photographer knows the person whose photo they are shooting and isn’t generally concerned about the technical aspects of getting the portrait perfect.  The photo’s general purpose is mainly to record a funny or poignant event within the fabric of a friendship or to establish a kinship with the individual being photographed.  It is often a moment when the subject and photographer are engaged in some flirtation or bittersweet sadness related to an impending separation, and as such these images have a strange power to elicit a memory of love, of infatuation, of loss. 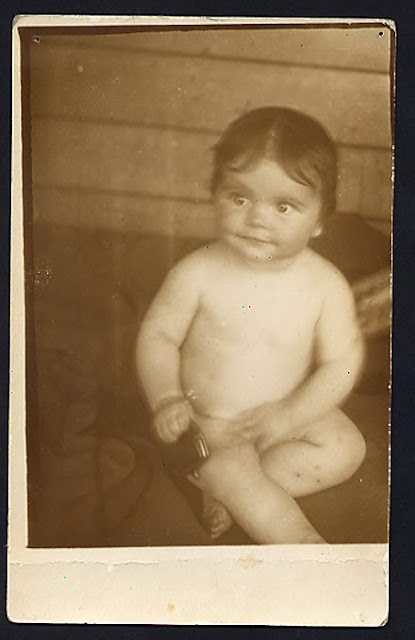 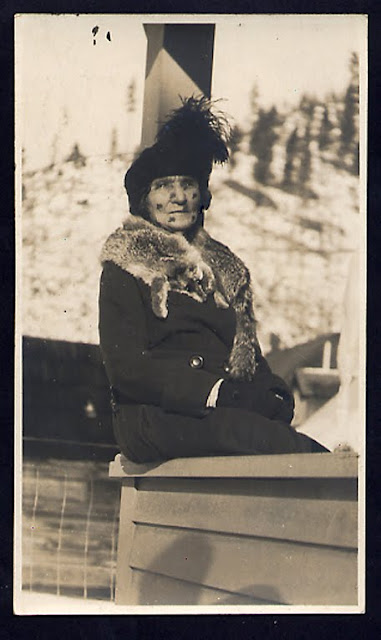 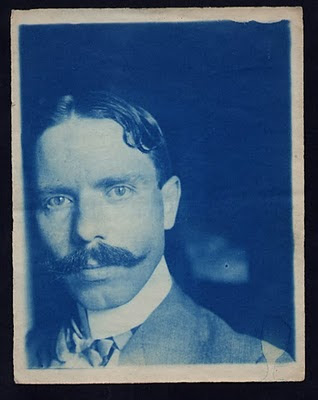 For us, they evoke something even deeper: a feeling of shared humanity, a sense that we “know” these people.  The impersonal gaze at the beauty of a face is an enduring fascination. 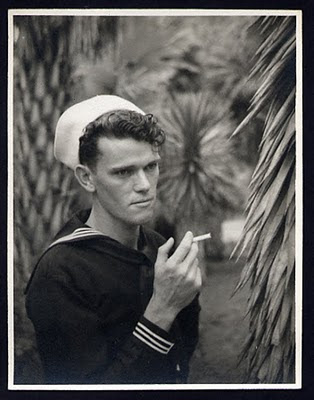 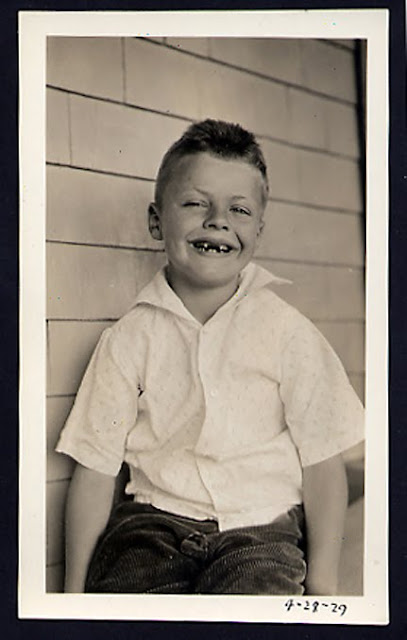 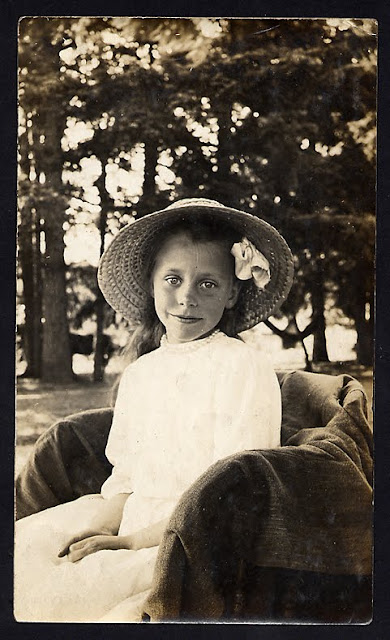 Click here for more on Robert E. Jackson and other Guest Contributors
Posted by Stacy Waldman at 12:36 AM 4 comments: