WHAT IS YOUR FAVORITE COLOR SNAPSHOT AND WHY?

When I had this idea for a blog entry, I never realized that it would generate so much excitement and participation.   Thanks to everyone for making the deadline and for contributing such awesome photos and comments!  The whole reason I started this blog 2 years ago was to help create an on-line community of people who love vernacular photos, a place where we all could share our thoughts and collections with the rest of the photo world.  And I think it has been a success in a lot of ways.  I have some great ideas down the line to make this blog even more of a community and as always, I appreciate any suggestions you might have as well.  It is your participation and contribution which makes this blog work.  I can’t do it alone.


Many collectors of vernacular photography will tell you that color photography is one of the most difficult areas in which to find great photos.  Partly that is due to the fact that color film appeared relatively late in the history of the photography and thus there are arguably less color photos out there than black and white.  In the snapshot world, it wasn’t until the late forties to early fifties that color became affordable such that the ordinary person could buy color film for their cameras. And color stabilization and fading are also issues to contend with, although often the imperfections are what make such photos a compelling addition to someone’s collection.  It will probably take another generation for the color hippie photos, the Woodstock photos, the protest photos of the sixties on to come to the marketplace.  So the fact that this entry contains so many wonderful color photos is a real testament to the collectors’ hard work in searching through bins of  flea market photos, getting up early to scoop the competition, and having a great eye for the material.


I think the next entry where I will be soliciting photos will deal with a collector’s favorite dog photo.  So start looking through your respective collections.  But for now, just soak in the color and commentary of what these collectors have uncovered...... Stacy Waldman
In no particular order......... 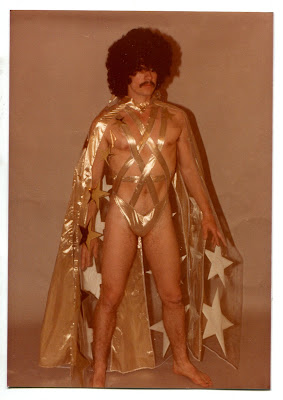 I love images of people acting out, being strange, or simply being outrageously themselves. I have always felt like an outsider and so I'm attracted to photographs of people who don't fit into the "normal" box. 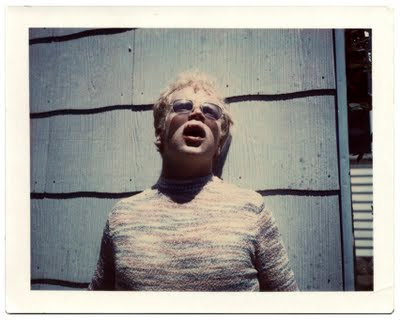 I have never believed in zombies, so what can I say about this photo? Strange? Absolutely!

As always, your guess would be as good as mine if trying to analyze this photograph. Is this young girl looking directly at the sun? Mesmerization is a word that pops into my head. What's she looking at? And she is not just looking—she is absolutely hypnotized at something above, in the sky. The return of the mother ship perhaps? I like that. The wide open and parched mouth — this portrait has so much to tell us if you look at storytelling. The washed out color, and the light which appears to be strongest on the subjects head—all of these things add up to a big checked box in the Accidental Mysteries category of snapshots.
I like the strange, the odd, the unusual. And why not? The flip side of that is familiar and boring—it's what we have to wade through to find something worthy and interesting.
Lastly, I have never liked photographs of human beings who are afflicted with obvious disabilities or who are mentally challenged. Perhaps this is one, but no one can be sure about this photo. So I am going with this photograph as just one of those awkward moments that speak to another level.
John Foster
Accidental Mysteries
_________________________________________________________ 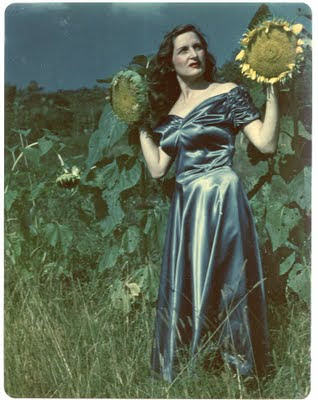 
The photo I have selected is a Kodachrome.  Larger than most and enigmatic in its content.  It might not be an actual snapshot by some standards, but rather a photo taken for a screen test or a fashion magazine spread.  All I know is that this image haunts me.  The blue which permeates the scene captivates while being muted to an almost inky indigo. The woman is beautiful but not young.  Why is she in a field of sunflowers?  And what possessed her to be in that field in a satin dress?  She doesn’t look at the camera, but is focused on something outside the photo’s frame as if in some twilight reverie. I am drawn to that woman and the mystery of the moment in a way that I wouldn’t have been had she not been recorded for eternity in color.  Yes, seductive. Quite.
Robert E. Jackson
For more information on Robert E. Jackson, click here. 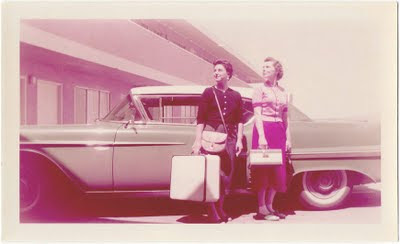 This is a wonderful photo by any standard, and all the more wonderful for being a snapshot. I would point out the casual rigor of its composition; the great faded red-green palette that only a Kodacolor can have; the mystery of the scene (coming or going? posed or not? friends, or something else? looking at what, and why?); its lurking sexiness (women alone, the American road, motel bedrooms); and finally the perceptible echoes of name art photography (Cindy Sherman, Henry Wessel). 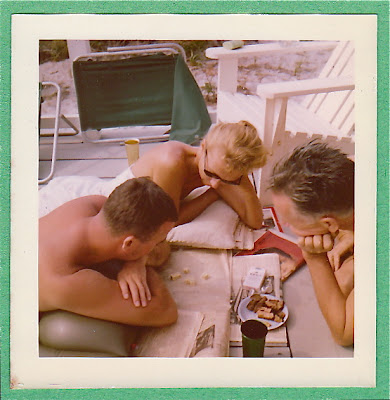 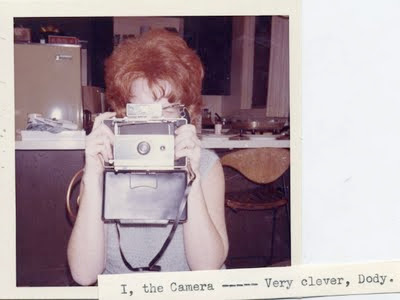 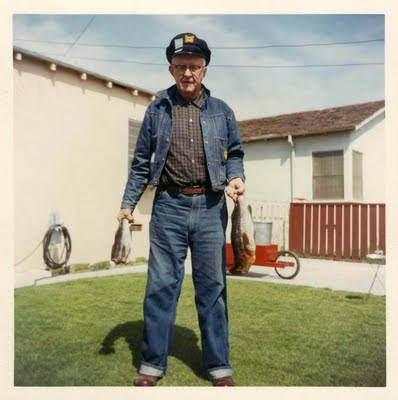 Poolside, c.1970
I love vintage color photographs – from the folk art quality of early hand painted photos (the messier the better!) to the interesting ways the dyes fade out in 1950s Kodacolor images, to the dreamy saturated colors of old Polaroid photos– it is hard for me to pick a favorite because I like them all! 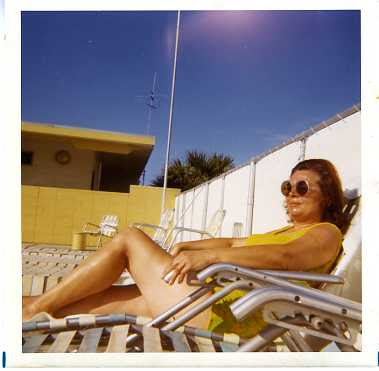 Poolside, c.1970 is a good example of composition and color being completely integrated in a photograph.  You can feel the sun in this picture. The bright blue sky, the shine on the woman’s skin, her swimsuit being the same color as the building and the contrasting similarity in color between the lounge chairs and the white fence all add up to a strangely appealing photograph. The color in this photograph simultaneously reads as both literal and abstract. If the color was stripped out of the image - if it was a black and white – the photo would not so neatly evoke a sense memory of summer (or be a reminder to wear sunscreen!).
Barbara Levine
projectb.com - a world of vintage photographs, found artifacts, art and ideas - the obsession of Barbara Levine, curator, artist and author of Finding Frida Kahlo, Snapshot Chronicles: Inventing the American Photo Album and Around The World: The Grand Tour in Photo Albums.
________________________________________________ 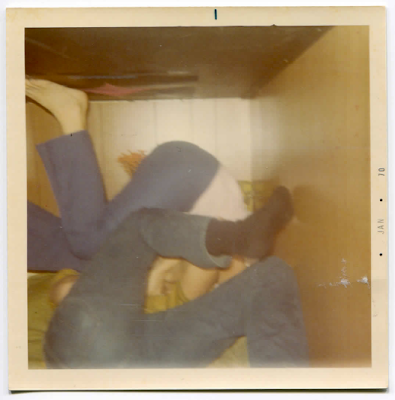 What I love about this photograph is it's disorienting formal qualities.  Where are these two people?  Which way is up?  What is going on?  The poster on the ceiling or top bunk adds to the dynamic composition.  The faces are buried.  Is this play or fight or love?  These tangled legs are caught in perfect frozen harmony, creating a snapshot that conveys a mysterious almost psychological type of abstraction.
Jason Brinkerhoff
Snapshots from Jason's collection will be at this NYC gallery in the Spring of 2012
Posted by Stacy Waldman at 3:48 PM 1 comment: