AN INTERVIEW WITH ESTELLE ROSEN - LEARNING HOW TO LOOK AT SNAPSHOTS

House of Mirth Photos has obtained an exclusive interview with Estelle Rosen, a photo dealer who has been a constant presence on the East Coast snapshot scene for upwards of twenty years and whose eye has had a great deal to do with defining the field.


Estelle, by all accounts you were among the first to recognize snapshots—for that you should get a lot of credit.  I imagine you weren’t following anyone.  What made you notice the first snapshot?

When I discovered photo albums in flea markets, I was fascinated by the beautiful light, the mood, the composition and design of the pictures.

I’d spent four years in art school and I had a trained eye.  I’m an artist, but I don’t think you need formal art training to see.  I think your eye gets more sensitive the more you look.  With some guidance your eye will develop over time.  We’re all creative in our own special ways, and snapshots are a wonderful catalyst for the expression of creativity.


“The expression of creativity.”  That sounds important.  Maybe you can enlarge on it later on.  Did you buy snapshots just for yourself at first, or did you try to sell them right away?

It was just for myself at first.  I shared them with a friend who became a constant customer and encouraged me to keep buying!  Selling snapshots has always come naturally to me.  I always felt I was selling my “vision.”  I felt I had something to say.

But my customers have guided me to some extent in what to buy.  Collecting snapshots is very personal.  People do it for different reasons.


Can you tell us a little more about the different kinds of collectors you’ve run into?

I am fascinated by what some people buy.  I know a poet who wants images that will inspire him.  He looks for sensitive images with a soft light.  They usually have a rural theme to them.  I can feel a poem emerging from some of the photos he chooses.  Another customer told me, “I need to be touched by the image.”  She’s looking for a personal reference.


What’s it all about for you?

For me it’s all about art—by which I don’t mean anything deliberate on the part of the people who took the pictures, as a rule.  I’m bringing an artful interpretation to them, if I can put it that way.

I sell my vision, and I collect my vision—although to me it’s more like just my favorites in a box!  But visions can differ.

We can’t know if the people who took the pictures saw what we see.  It’s there if you can see it.  And not all snapshots have it.


When you talk about art, what do you mean?

I mean a “look”—composition, lighting, formal things.  The way I think of it, there are universal standards that anyone with an eye can spot.  But each of us uses the standards to construct an aesthetic, which is personal.  As I say, visions can differ.

When a snapshot has the things we look for, it has them accidentally. That leaves room for us, for our own creative eye.

Without that creative eye, snapshots would just be family photos.


Estelle, maybe you can help us by explaining what you see in a few examples. What would you say to someone to get them to appreciate what’s good about these? Here’s the first. 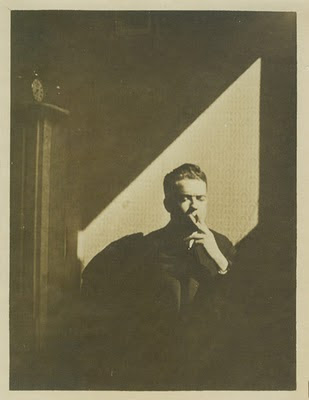 The first thing I look for is the abstract design of a photo.  Here the light and dark areas play off each other to define the image as a whole. It’s a rigorous, “mathematical” design.  The subject is beside the point here.  The composition, light, and forms say it all. 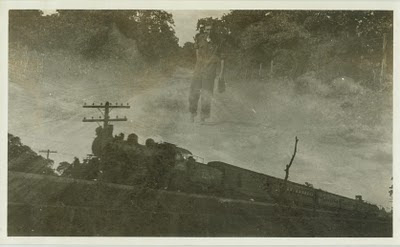 Double exposures relate to surrealism—they suggest a wider art context.  This one could easily be made into a painting.

These two images came together accidentally.  But part of appreciating snapshots is that we welcome accident.  And of course the surrealists did too.

The dark forms in the front create an interesting spatial relationship with the background: the foreground is flat, but that highlights the receding of the top image.  You have an illusion of depth that the top image alone would not have had. 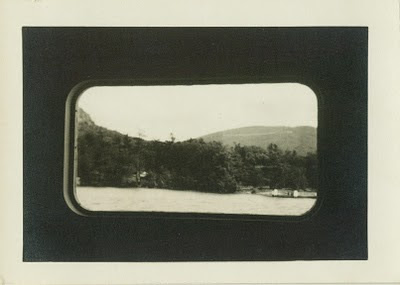 What I like here is the way the image is framed by the dark form that surrounds it.  The contrast between the dark enclosure and its opening brings out the nice horizontal design of the landscape.  On the mundane level, of course, it’s just a view out a window. 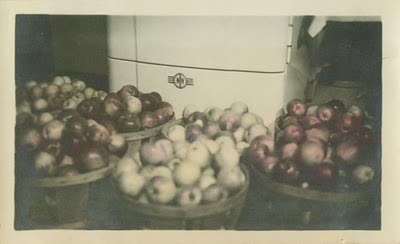 Here the white form of the refrigerator sets off the dark space surrounding it.  And the foreground came out in soft focus—so that the tinted fruit seems to have a soft texture, which is a perfect balance to the simple, flat, untinted forms in back.  So you have contrasts in two directions—center against the sides, and back against the front. 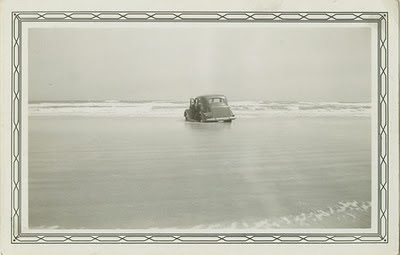 This one has mystery—an atmosphere and an implied story.  That car isn’t going anywhere!  The placement of the car is perfect.  It makes for a wonderful composition. 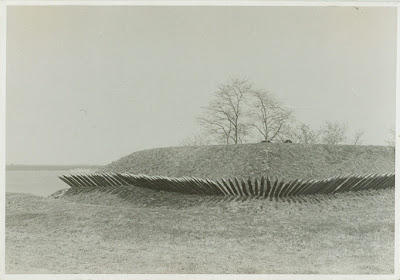 The fence has a gentle flow and there’s a slight movement in the trees at the top.  The fence is an interesting distraction from the bland hill.  Movement, texture, and space come together to create a lovely, simple composition. 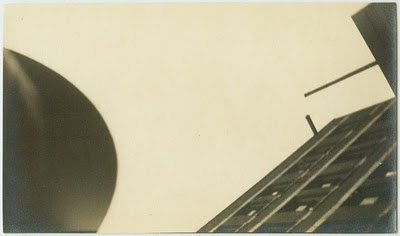 This is a powerful abstract statement, going far beyond the subject matter.  The empty space becomes a form of its own, supported by the dark shapes.


As a dealer of very long standing, someone who’s been watching the ups and downs of the field from the beginning, you have a unique on the snapshot scene.  What do you think we can do to help more people appreciate snapshots?

We need to be bringing more aesthetics to what we do, and we need better language to talk about what’s in these pictures.

The real challenge is to own your creative eye, as snapshots allow you to do—to understand what pleases you and why, to develop your own personal aesthetic.


Thank you for talking with us, Estelle!


Estelle sets up at various shows on the east coast.

You can see Estelle's art work at estellerosen.com

Posted by Stacy Waldman at 3:52 PM