For this group blog post, I asked a few collectors to share a favorite tintype.  The images below are powerful and thought provoking.  As you will note, a tintype doesn't have to be in perfect condition in order to be loved.  Please let me and the collectors know what you think.  Next month:  A favorite real photo postcard.  Have one you want to share?  Drop me a line.  Stacy Waldman 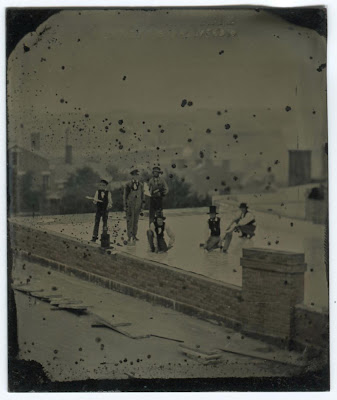 A group of roofers pause in their work taken from a higher roof nearby (that two of the guys wear stovepipe hats, I find quite humorous). It's hard to make out but stamped into the metal along the top edge is this imprint: "MELAINOTYPE PLATE FOR NEFF'S PAT 19 FEB 56," which dates the tintype from c. 1857.  Very early for an outdoor tintype, or any tintype for that matter. I love the framing of the image, the depth of field, the subtle tinting of brick and trees, and especially the seeming formality of the workers. They crouch and stand in place, still clutching the tools of their trade, as if this is only a temporary interruption to the work at hand. I don't even mind the weird pock marks that mar the image and that date back to when the plate was made, as the marks are under the varnish. They were still learning how to make tintypes, I guess. I'd only been collecting for a year when I bought this image, and I paid way more money than I had yet paid to date for a single image. At lunch that day with a far more experienced collector I expressed buyer's remorse, and she offered to take it off my hands almost as fast as the words were out of my mouth. I laugh when I think about that moment now. No thanks, I think I'll be keeping it. 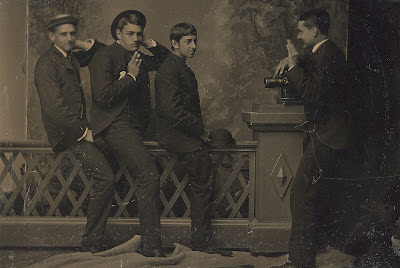 Hannibal (Hannie) Emery Hamlin photographing his friends.  Hamlin was from Bangor and went to Colby College. This tin came in an album of images showing him and his buds fooling around in a studio.  Hamlin's identification was written on the flypaper. Hamlin's father was Hannibal Hamlin, President Lincoln's first Vice-President.  Hannie went on to be a lawyer and a politician himself.  I was able to identify the photographer in this image as Hamlin thanks to later images of him I found online. Also, he was the only guy in nearly every tintype. 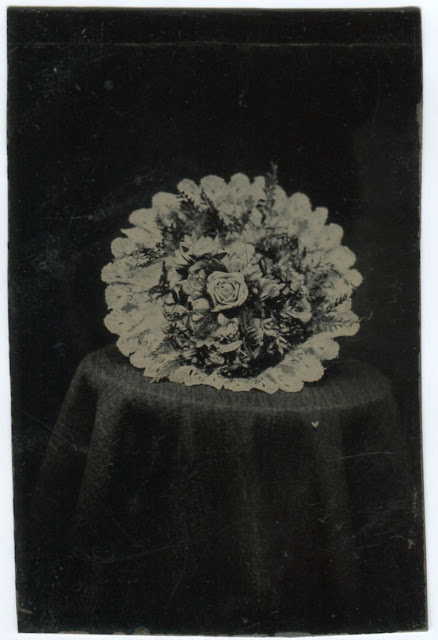 Attached are 2 images of my favorite flower tintype. I love the composition of the still life—the simplicity of the wedding bouquet lying on the table, but what elevates this image into my favorite territory is the inadvertent portrait of the fly. The fact that the fly stayed still during the entire exposure humors me, and makes me smile whenever I see it. 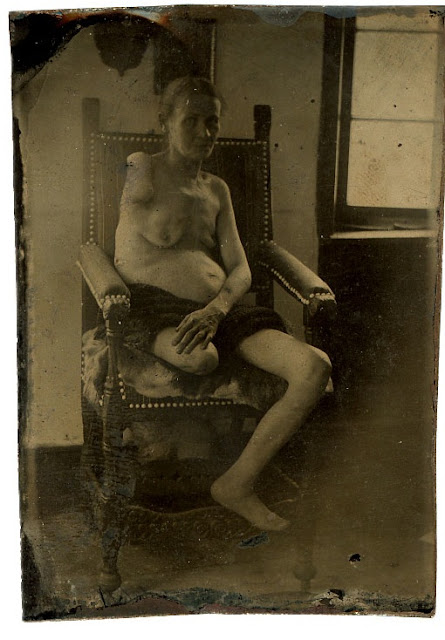 In addition to this tintype's initial shock value, I find it intriguing in it's composition and the subject's posturing and facial expression. Overall, I feel it has a powerful presence.

Jim is working on his biography.... 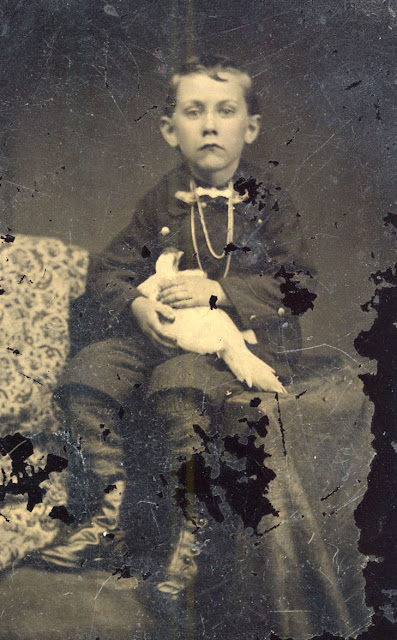 When I started collecting antique images of children with pets, I was really surprised by the number of studio photos that included poultry. It would have been relatively easy to take a dog to the photographer's studio, and somewhat less convenient to carry along a pet chicken, duck, goose, or turkey. The birds included in children's portraits must have been truly beloved. This boy's mother has arranged his hair in a typical little forelock. He is wearing jewelry and shiny new boots, and holds his little white hen still for the camera. 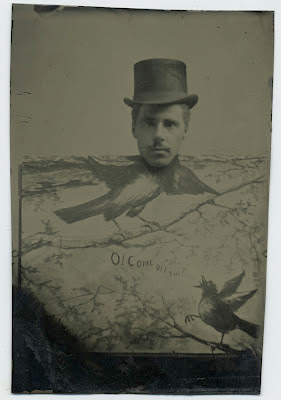 I am enamored of arcade images as they deal with fantasy and aspiration in regard to the types of scenes which feature the head of the sitter (or sitters).  The most common arcade tintypes generally involve people on a horse or driving a horse drawn wagon or carriage.  So to find one like this was a real treat.  What is written on the tintype is "O! Come Off the Perch" as sung by the bird on the lower branch. 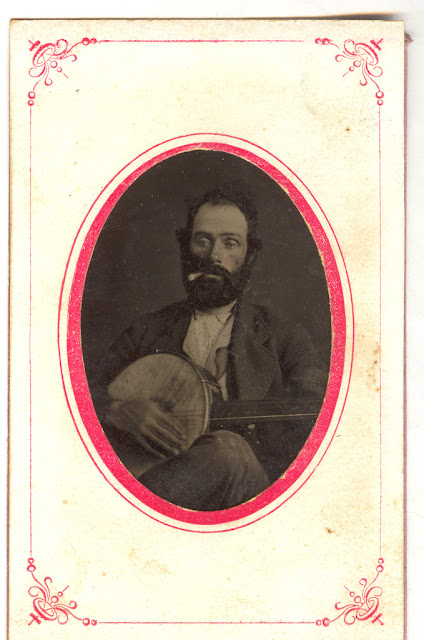 I was gonna go with some other tin, but then, like Barry Bonds, I decided to go with the cream.  Certainly there are other banjo player photos out there, but I haven't seen one I'd trade mine for.  The beard, the stogie, the eyes lost in the river of time---here is the physical manifestation of a musical essence.  Look closely at that hand strumming the strings.  The fingers are doubled----they couldn't stop moving.

This gentleman looks like Emmett Kelly, that most famous of circus clowns.  Like Kelly, he seems to express an almost bottomless sadness.  There's always farther to fall, he seems to be saying.

The photo came from an Ebay dealer in Iowa.  Davenport, maybe.  It was somewhere on the river.  1870's, maybe? 1880's?  It couldn't have been all that long since the Civil War.  This is one of those faces that, when you look at it, you almost don't want to know how it got that way.  Just imagine the music this man must have played. 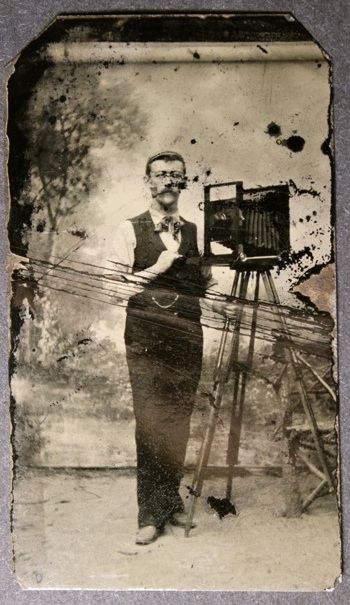 I really love the surface on this one. Just think, this was made long before they invented Hipstamatic, Polaroid emulsion lifts and Photoshop.  It has, and will, outlast all of those processes for sure. It certainly will outlast all of you viewing this image. I'm not quite sure if it's a self-portrait or not, maybe a second camera was used.  The sure sight of this gem makes me think of its past.  Who has seen this tintype? How many homes has it had? I do know if it has found its final resting place in mine.

It has weight to it--both physically and metaphorically. Like a single frame taken right out of a 16mm home movie, only the creator knows of its past and the times surrounding it. The present is up to us.  'All of which' reminds me of current artist like Jefferson Hayman and Masao Yamamoto. 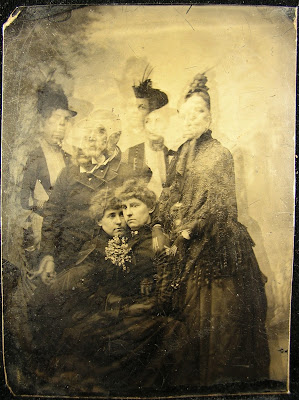 “Is everybody in?”
~ Jim Morrison

“This is a place of dead roads. Of rot riding yanks and peat men and cat burglars, black bindle stiffs and hobo jungles. Here is Salt Chunk Mary the fence in her red brick house down by the tracks in Portobello, Idaho.”
~William S. Burroughs

“Chance encounters are what keep us going.”
~Haruki Murakami

“The only credible answer to the question, ‘What is a work of art?’…is ‘Anything that anyone has ever considered a work of art, though it may be a work of art only for that one person’.”
~John Carey

"And just then it occurred to him that he was going to die. It came with a rush; not as a rush of water nor of wind; but of a sudden evil-smelling emptiness and the odd thing was that the hyena slipped lightly along the edge of it.”
~Ernest Hemingway

“The taste for quotations (and for the juxtaposition of incongruous quotations) is a Surrealist taste.”
~Susan Sontag

“A photograph could also be described as a quotation…”
~Susan Sontag