WOW! BOY IN A DRESS - Part III by PAT STREET

To recap, the four things to consider when trying to decide the gender of a child in an antique photograph are Hair, Clothes, Props, and Pose.  In previous posts I covered Hair and Clothes; this time we'll take a look at Props and Pose.

1.  Boys' props.  If the child is shown with any of the following, it's most likely a boy. The choosing of props was influenced by images of children in popular culture -- trade cards, book illustrations, and decorative prints. 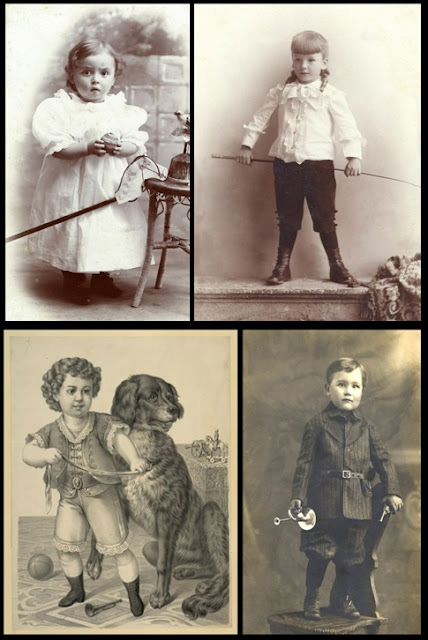 C.  Vehicle toys.  Toy horse and wagon, boat, tractor, car, or train; ride-on toys such as Irish Mail, tricycle, wagon. The first photo shows a boy on the left and a girl on the right. The other photos show boys. 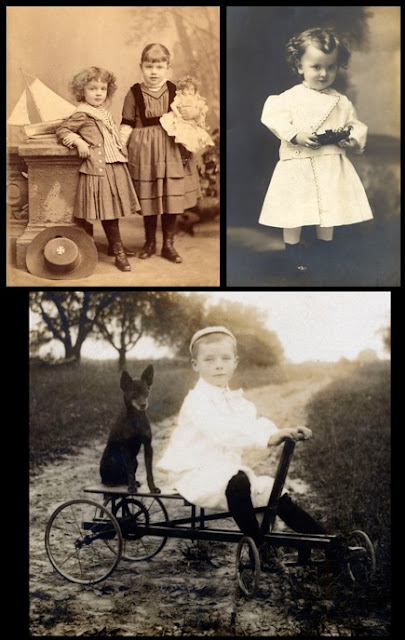 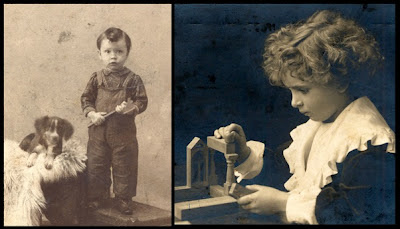 F.  Boy dolls. I have many examples of boys with dolls. Boys often have boy dolls. As with children, if the doll is wearing a dress, it could be a boy doll.  These children are all boys. 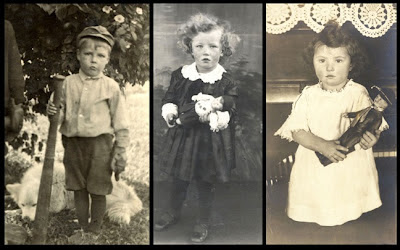 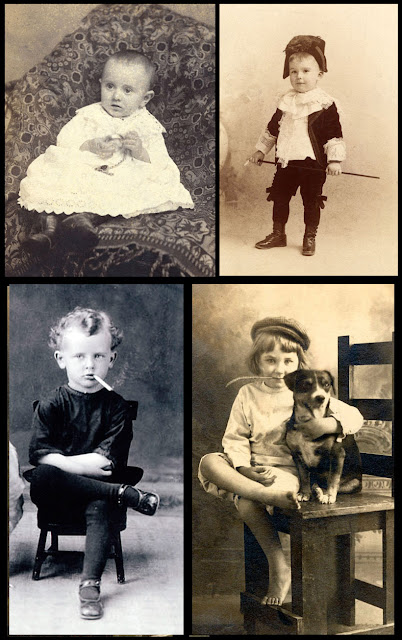 2.  Girls' props.  The child is probably a girl if you see these props, no doubt meant to indicate that she's motherly, domestic, modest, and feminine:

B.  Dolls and doll buggies.  Usually if the child has a doll, especially a fancy doll, and/or a doll carriage or stroller, it's a girl. These are girls. 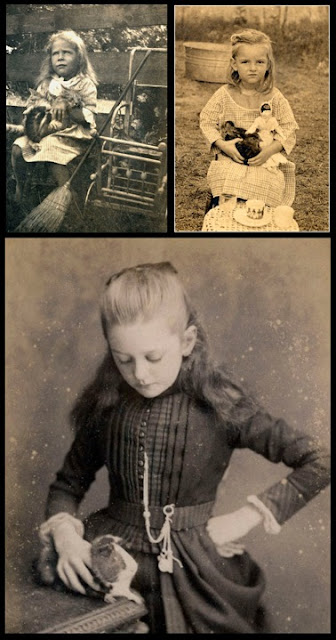 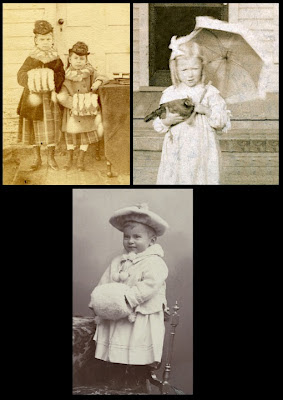 D.  Girls' tricycle.  Considered a more modest tricycle for little girls; they could keep their knees together. These are girls. 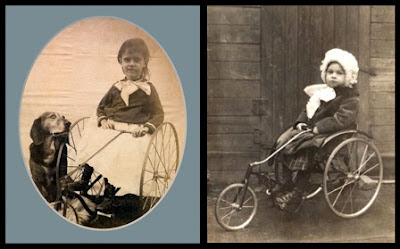 E.  Flowers.  Usually seen with a girl, but surprisingly often with a boy. These are all boys.

3.  Unisex props.  The child could be either a boy or a girl with any of these:

A.  Toy or fake animals.  After 1902, teddy bears appeared in many photographs with children of both genders. 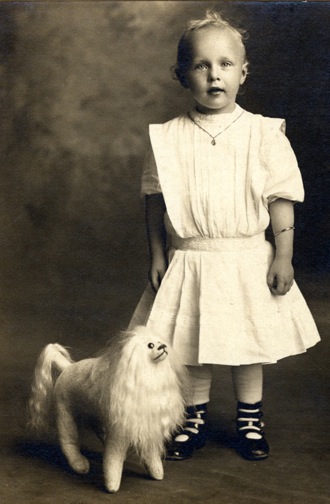 B.  Books.  A book in the image would be meant to suggest that a child was literate, cultured, and scholarly, and— if the book is a bible—pious.  The child holding the book, below, is a boy.

C.  Musical instruments.  If a child played an instrument, he or she might be posed with it.  Even if a child didn't play anything, sometimes the photographer used a musical instrument as a prop to convey a sense of culture and gentility.  The child with recorder or flute is a boy. 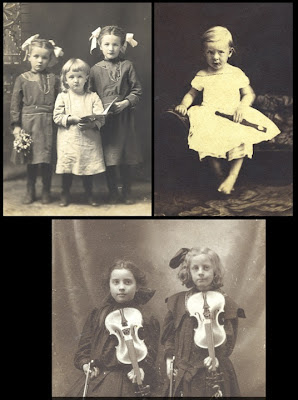 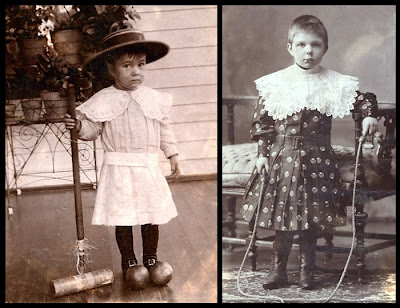 E.  Pets.  Children's portraits with their pets were popular.  Including the child's pet gave the child something to relate to and suggested family warmth and a happy home life.  Sometimes the photo studio provided animals (live, taxidermied, fake, or toy) to enhance the photograph. 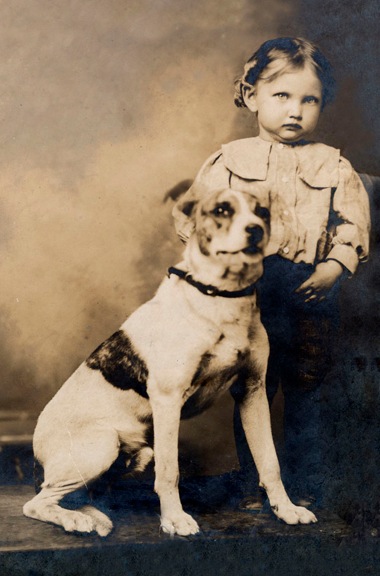 4.  Pose.  Sometimes the pose is all that will help you. Here are some ways to tell the child's gender if there are no hair, clothes, or prop giveaways.

A.  Aside or astride?  If a child is posed on an animal seated aside, it's a girl. It wasn't considered ladylike to sit astride, but some girls did. Boys did not sit aside. This is a girl. 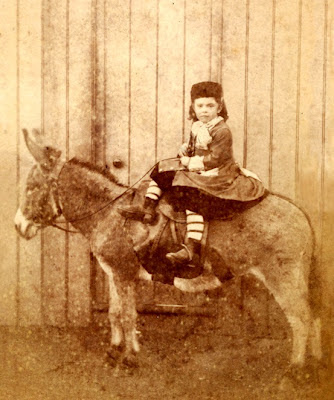 B.  Dance pose.  Generally a girl, unless a vaudeville performer, then sometimes a boy, a boy dressed as a girl, or a girl dressed as a boy. The child on the left is a boy; I'm not sure about the pair of dancers -- either a girl and boy or two girls. 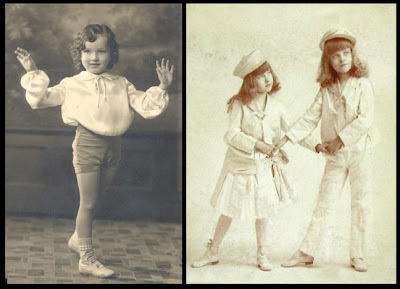 C.  Napoleon pose.  If the child has a hand tucked in the front of the dress or jacket, it's a boy. 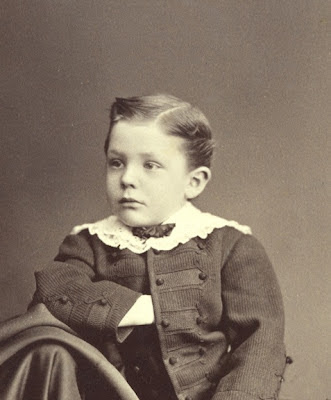 D.  Unladylike pose, body language.  Little girls were generally posed to look dainty and demure. If the pose is really unladylike or bold, legs spread, hands on hips, hands in pockets, chances are it's a boy. Sometimes you just have to go with body language! 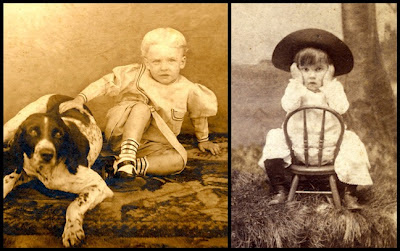 Identifying the gender of a child in a nineteenth-century (or early twentieth-century) photo isn't always easy. I hope this brief survey of customs in hair styles, clothing, props, and pose has been useful to collectors and sellers!