SCHOOL DAZE - A LOOK BACK 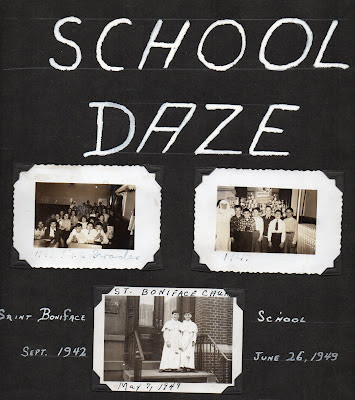 It was suggested to me that I do a group blog on "School Daze" for the start of school.  That same day, I came across this photo album page and knew that it was meant to be.   There is an interesting assortment of photos below, some typical, some not.   What do you remember when you think back to your school days? 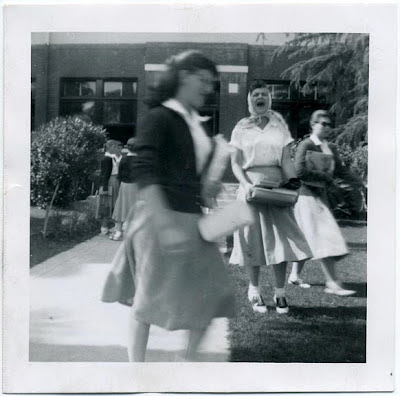 We all have days like this: when the world around us seems to move with a purpose and determination that both eludes and seems to exclude us; when our own confusion, inertia, fear or panic, pushes us to that place where our failure to "keep up," or our sense that we're drowning while others swim confidently forward, provoke in us the overwhelming desire to just stop...to scream in a (probably) futile attempt to still the madness.  This picture captures that moment (at least in my fanciful reading of it): a moment made all the more intense by the blurred figures moving on the diagonal or seen in profile, the foregrounded one with a discernible smirk, the figure to the right (from the viewer's point of view) of our stationary, screaming protagonist, steely and expressionless behind her sunglasses.  What other elements add to this scenario?  The two moving women, with their dark sweaters hold their books primly and confidently in the crook of one arm, while the central girl clutches her possessions with both hands; the moving figures are bare-headed, the screaming girl's scarf covers her ears, its paleness and pattern highlighting her sweater-less blouse.  The camera caught her at the climax of her vocalization: her whole body is seized with the energy of the voice (her bobby-socked feet are on tip toe on the grass).  And then there's that gaping mouth and the scrunched up eyes. This may all have nothing to do with the terrors of school.  She could be hailing an unseen friend or erupting in laughter.  But I like to think that there's an emotional truth in the image: that singular feeling of being overwhelmed by intense frustration in the midst of a world that is indifferent to everything except its own blithely forward momentum. 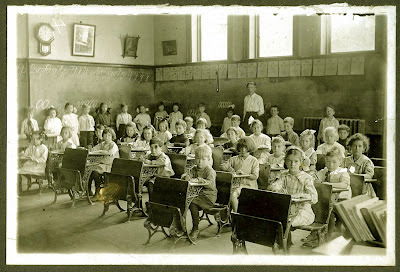 A photograph of my grandmother, Vivian Libby, c.1910. This was her second grade classroom. Vivian is seated in the second row in from the right - the girl with the big bobbed hair and sad eyes (even at that age she stood out!). 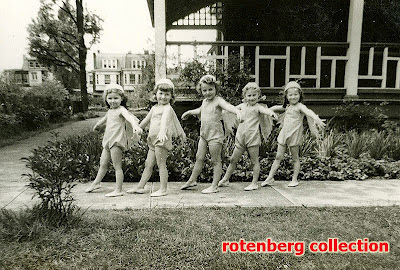 These charming young ladies were attending the Irene Lingo Dance School when this lovely image was captured on May 15, 1947. Their innocence, poise and pride are wonderfully conveyed through the lens of the camera. Clearly, these young dancers were under the tutelage of their instructor as they gracefully formed a line. Matching costumes and dance shoes unify this little troupe in preparation for a recital. One can well imagine the beaming expressions on the proud parent's faces as they watched their daughter's artistic movements onstage. Irene Lingo's school seems to have operated out of the Philadelphia region from at least the 1930s into the late 1940s, performing dance recitals in numerous locations. 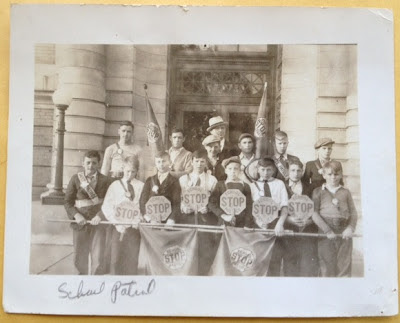 So who wouldn't want a badge and a leather strap across their chest?

Edward, he's the one with the circle around his head, looks like a volunteer.  I think a few of the other boys might have been drafted!

My photographer friend, Vaughn Wascovich and I spent some time deliberating over the technicalities of this shot. What vintage camera was used? What was the shutter speed? But I feel that this covers it best...A cool autumn day. Kids dressed in their Sunday best for the photographer. Picture day at school. Well behaved children. It appears to be shot in the morning according to the angle of the sun. A warm, lovely sepia panoramic contact print that I found this past July 4th weekend. Not usually fond of group shots, and yet this photo interested me because it pivots around one little girl who is nearly dead center. She's got a self-assured smile and a piercing gaze that looks straight into the camera. 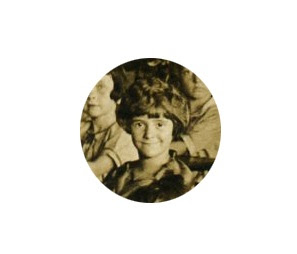 I spent the next few days trying to figure out who she reminded me of and then it dawned on me--Stanley Kubrick's film, "The Shining." A movie where a group photo played an important role at the end of the film.

The little girl's confident smile among the class of 44 students struck me as similar to Jack Nicholson's character, Jack Torrance and his smile amidst a crowd of party revelers at the very end of the movie. One person sure can make a group photograph interesting. And oddly enough, while I don't know the date of this classroom photograph--my best guess is it was taken sometime in the 1920s--the prop photograph from "The Shining" shown at the close of the movie was dated July 4th, 1921. 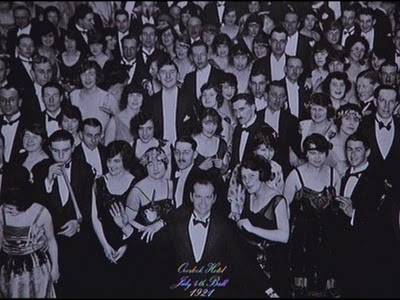 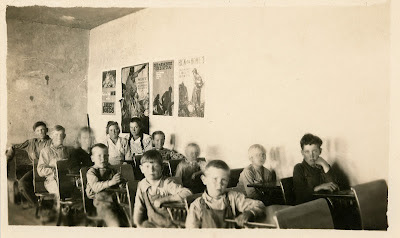 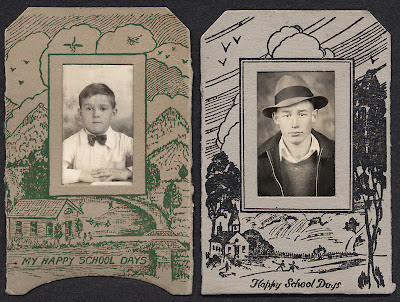 I am an avid collector of the "graphics" surrounding photography.  I love gem tintype paper frames with their elaborate engravings as well as these simple cardboard frames sold with photo booth or studio shots.  We often forget that in the 20th century, the industry of photography was big business.  It wasn't just about the photo itself; rather for studios and portrait photographers, it was about how to transform the photo into some sort of decorative object which customers would want to purchase as a souvenir or a memento of some event.  And if you had kids, you wanted to have a record of their progress in school and the associated "happy days" which would hopefully be remembered by all in the years to come. 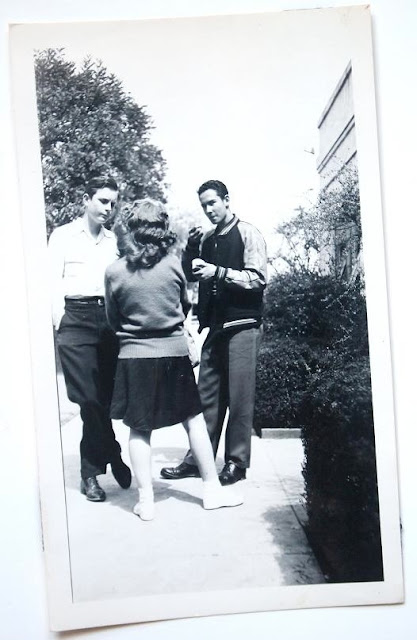 A snapshot of three students outside their school - two boys and a seemingly pretty girl (she has really bouncy shiny movie star hair). The boys both face her, however the boy on the right in the cool letterman has just caught the camera's gaze as he eats something out of a container (yogurt? ice cream?). It was at that moment, the artist decides to click.

I like moments such as this that are candid and somewhat secretive. We don't see the girl, so we can only wonder what she might be saying, however the boy on the left (who is listening) has a queried look like he doesn't know what to say. She was probably just being silly...boy problems, judging from the boys’ reactions.

Great example of teenage style of the 1950s as well! 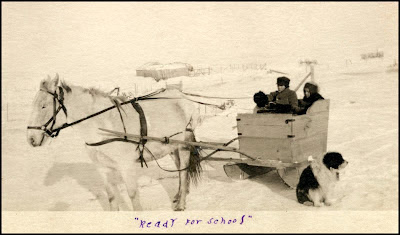 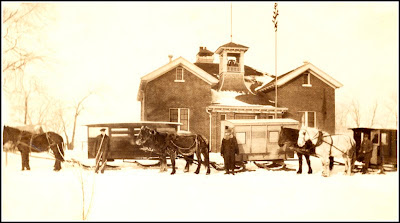 Here are a couple of school-related photographs. The first one, ca. 1910, states on the back that these young children are setting off alone on a twelve-mile trek to school (imagine that!) in a box sled built by their father. The horse's name is Daisy; it's not clear whether the dog stays at the farm or goes along. The second photo shows three winter school buses/sleighs with their horses and drivers in front of a nice-looking brick school building. 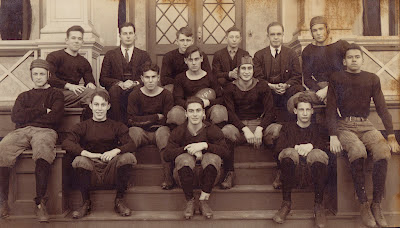 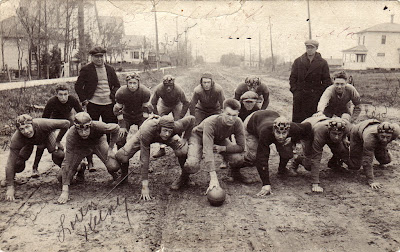 Back to school also means back to the gridiron for countless high school and college football teams. While looking through my collection, I realized that I had two very different high school team photos that were both taken in 1915.   First we have the students of the elite Lawrenceville Prep School, located in New Jersey, and the other the high school team is from the small logging community of Blackduck, Minnesota.

I like to imagine what the final score would have been had these two groups of young men been able face off against each other. 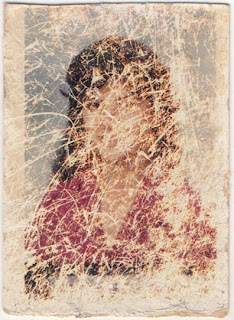