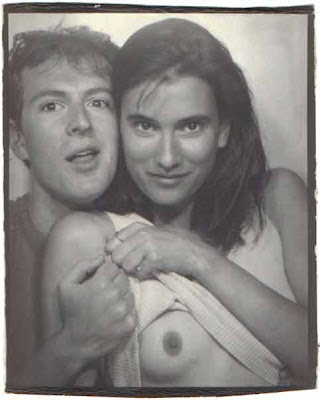 1. Mark Glovsky pointed out to me that nudity is oddly rare in photobooth portraits, and he is absolutely right. This is the only example I have. I think it’s pretty recent, so maybe it doesn’t even count.

Where is all the photobooth nudity? By rights it should be common. People had every reason to believe they would be the only ones who ever saw what they did in the booths; in this respect photobooths are like Polaroids, which aren’t processed by a lab and—for that very reason, I’ve always thought—are full of sex and nudity. And if you were a certain kind of person, wouldn’t you take the curtained-off booth as a dare? 2. Shadow images like this one occasionally turn up. They are created by decades of close contact between a photo and a piece of paper or cardboard, as in the case of this cabinet card. In very specific chemical terms, what is going on here? 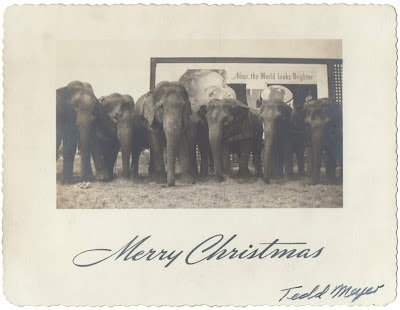 3. When you took photos to the drugstore to be made into Christmas cards, birth announcements, etc., I assume you were shown samples, so that you could say, “I want this format.” What did these samples look like? Was there some sort of sample book, perhaps? Was it standard, distributed from a central point—possibly the lab that did the processing?

Joel Rotenberg
The Art of the Snapshot
Posted by Stacy Waldman at 3:53 PM 8 comments: