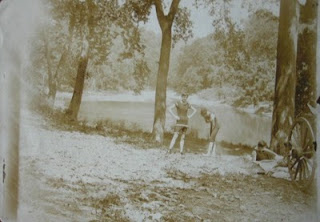 Swimming holes are part of our national consciousness, our mythology, our folklore. Back before central air, electric fans, indoor plumbing and private pools became common household amenities, most overheated sufferers had to content themselves with a trip to "the old swimmin' hole." Whether a creek (always pronounced "crick"), a pond or a rocky gorge, the old swimming hole was a universal playground for rich and poor, old and young, male and female, and the clothed or unclothed. It became part of the fabric of our lives, as American as apple pie or Huckleberry Finn. 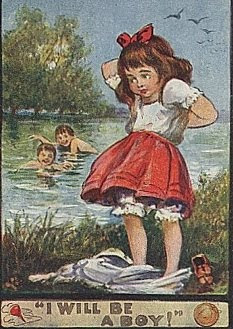 At the turn of the last century, swimming holes became a source of nostalgia, a symbol for Americans of the price of progress, of all that had been lost thanks to modernization. Every town and village in the country sent out photographers to take pictures of their local swimming holes, putting them on postcards that visitors and residents alike sent to friends and family. I began to collect some of these souvenirs a few years back when I stumbled across an old photo postcard of a Hudson River scene at an antique store. It reminded me of my early summer days at camp where my cabin buddies and I would slip off to one of the rocky slopes along a lake, strip down to our birthday suits, and climb a weathered old piece of rope that flung us out into the crisp rain-fed waters of an old pond. Over the years, I've collected dozens of Swimming Hole images on postcards, stereoscopes, calendars, jigsaw puzzles, magazine covers, printing blocks, matchbooks, ashtrays, glassware, handkerchiefs, medallions and, of course, old photographs. There was even a film in the 40s called The Old Swimmin' Hole, starring Jackie Moran. Its lobby cards and posters turn up occasionally on eBay. 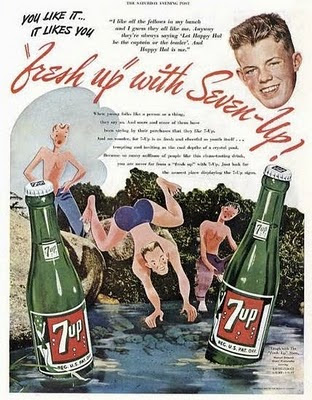 What these bits of time-worn ephemera represent to me is a mirror into our past, a kaleidoscope of more innocent times and carefree days. Most of these mementos feature bathers, skipping across the edge of a creek, throwing themselves into the water. More often than not, the subjects are nude, or "nekkid," as we used to say. Some who have glanced momentarily at my collection have raised their eyebrows with suspicion. Aren't these images somehow a bit risqué? That to me is a sad comment on the times we live in today. For when these postcards and trinkets were published no one thought there was anything even remotely inappropriate about the subject matter. Magazines as mainstream as Life, Collier's, Saturday Evening Post, Liberty and Popular Photography often plastered their covers with images of young kids diving au naturel into swimming holes. 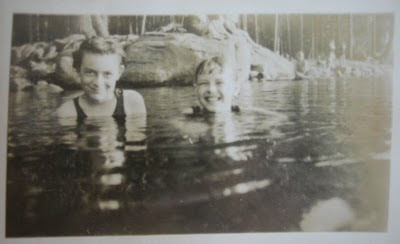 Famed artist J. C. Leyendecker did numerous swimming hole images for the Post. Norman Rockwell, who more than any other artist represents the heart and soul of American wholesomeness, was commissioned to do a dozen or so swimming hole-themed magazine covers. Some of his most cherished art works depict nimble youths dashing into streams, creeks and lakes without fear of censure or opprobrium. Even the Boys Scouts, that rigid symbol of good Christian virtues and cleanliness, thought nothing odd in publishing images of skinny-dippng boys on their fraternal journals and inside their magazines. Thomas Eakins painted perhaps the most famous version of the Swimming Hole; it now hangs in the Amon Carter Museum in Fort Worth, Texas. 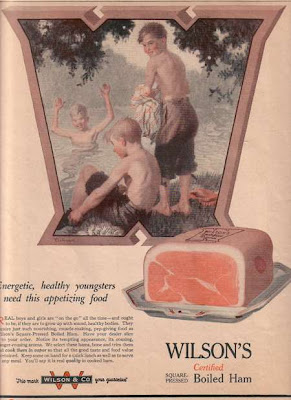 What is remarkable in looking back over the vast variety of Swimming Hole ephemera is how much humor there was in it. Rockwell was best at capturing the unbridled glee of youths shirking their menial duties while grasping an hour of free time at the old "hole." Other cards and advertisements focused on the good clean fun of bathing regularly (at a time when most people only took a bath on Saturday nights). Ads for Ivory Soap, Crisco, Cream of Wheat and motor oils emphasized the hygienic benefits of swimming regularly. In later years, soda companies like 7-UP underscored the sheer exuberance of the experience. 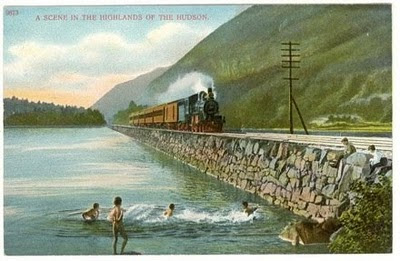 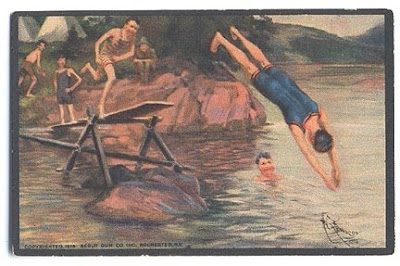 During the Second World War, the Swimming Hole came to symbolize the comfort of home, and seemed to represent the very ideals the soldiers overseas were fighting for. Cannon Towels did a series of several ads in the 40s showing buff soldiers recreating their favorite swimming holes in far-off lands in India, Africa and the Far East. The Swimming Hole served as a touchstone of sorts of male bonding and camaraderie 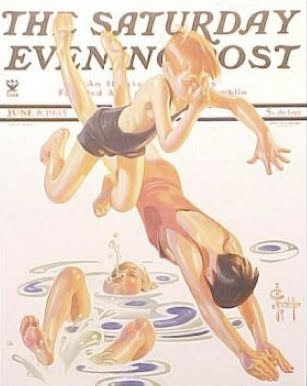 Recently I've read that the Swimming Hole is in danger of disappearing for good. Property owners have put up signs forbidding trespassers from accessing their lands. Insurance costs have skyrocketed making liability too dangerous a proposition. That won't stop people from slipping past the signs and escaping the watchful eye of state troopers and local sheriffs. If one can't strip off one's clothes and dive into a crystal clear lake anymore, just because someone is afraid you'll sue them if you slip and fall and break your neck, what's the point of living in the country anyway? We might as well all move to law school and spend our time in the stacks reading torts. 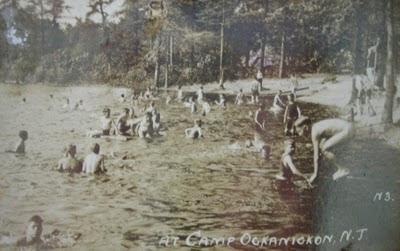 Here are a few parting words from James Whitcomb Riley, the author of the famous poem "Ye Ole Swimming Hole."

Oh! the old swimmin'-hole! When I last saw the place,
The scenes was all changed, like the change in my face;
The bridge of the railroad now crosses the spot
Whare the old divin'-log lays sunk and fergot.
And I stray down the banks whare the trees ust to be --
But never again will theyr shade shelter me!
And I wish in my sorrow I could strip to the soul,
And dive off in my grave like the old swimmin'-hole.

Even when he wrote this touching bit of colloquial verse, he knew the swimming hole was fading fast. For most of us now, it is just a wisp of a memory, a souvenir of times past, but a world of comforting recollections well worth collecting. 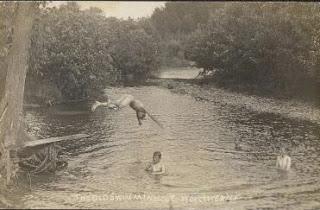