Here are a dozen more images in poor condition that made it into my collection — some of them precisely because they were damaged.  These show additional types of damage, several of which were inflicted by well-meaning people who believed they were enhancing the photographs. 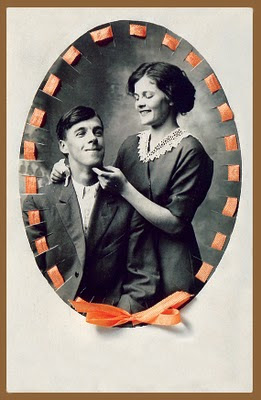 13.  Here’s a sweet real-photo postcard (RPPC) of a young couple. Someone, probably the young woman in the photograph, has cut slits around the oval image and woven a pink silk ribbon through the slits, finishing with a bow.  A charming touch, but many serious collectors of photographs would dismiss this one. 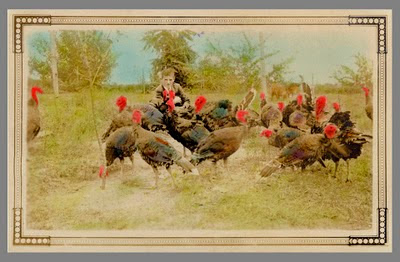 14.  Once people were able to take their own snapshots, many amateurs gave hand-tinting a try.  Here’s an example from the 1930s of amateur colorizing gone wild.  The artist was quite careful about it — note the turkey’s head meticulously separated into two red blobs by the small tree on the left. But the vivid red he or she chose makes those turkey heads glow like neon. I love the effect. 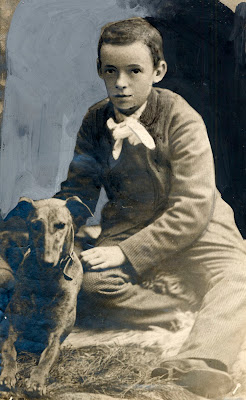 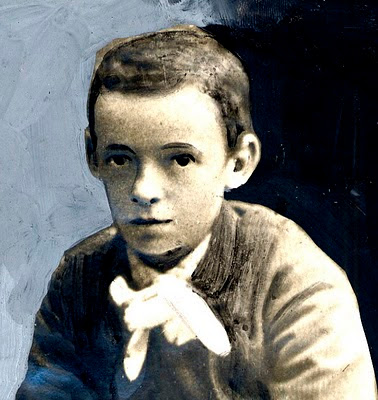 15.  Here we have a cabinet card of  “Mr. Walter L. Martin at the age of 10.” This is a drastic retouch job done with an opaque paint, possibly gouache, and ink. His eyes, nostrils, and upper lip have been inked in (see detail), and someone (the photographer or an artist in his employ?) decided the portrait would look better with extreme shading of the background: darker on the light side of the head, lighter on the dark side. They were right, but they should have thought of that before making the exposure, and a steady hand with the paintbrush would have helped. 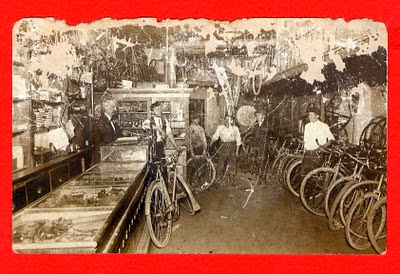 16.  When you collect ephemeral items like antique and vintage photographs, you often have to rummage through bins or boxes of unsleeved images.  Of course, these photos suffer additional damage every time someone looks through them.  Other images, like this one, perhaps spent fifty years or so in this shop’s junk drawer, accumulating scratches and scuffs every time somebody looked for a screwdriver.  If perfect, this RPPC would go for a couple of hundred dollars. It’s so worn that it’s limp, but it’s still a fabulous interior shop image. 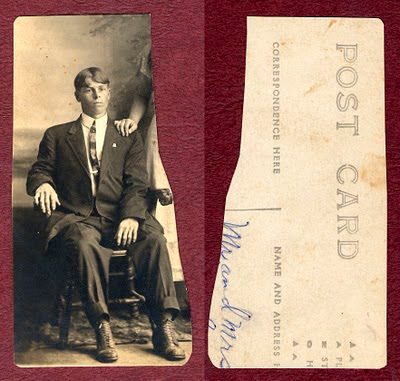 17.  Decisions, decisions. My imagined narrative here is that this guy’s wife left him for another man. Then this guy angrily thought about throwing away this RPPC portrait, but wait, he really liked how he looked in this portrait of himself, so he cut his wife out of the image.  He wanted his entire body in the part he kept, which meant he had to keep his wife’s hand on his shoulder, and had to keep enough of the writing on the back to still say “Mr. and Mrs.” 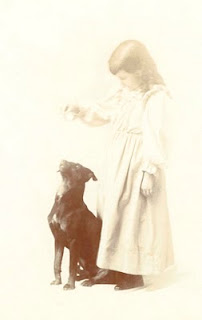 18.  Severe fading in a photo often makes it lose its power, but in this 1893 cabinet photo of Ava and her dog, it adds a dissolving, ethereal quality.  I like Ada’s focus on the dog and the dog’s focus on the ball.  Life is transient; let’s play. 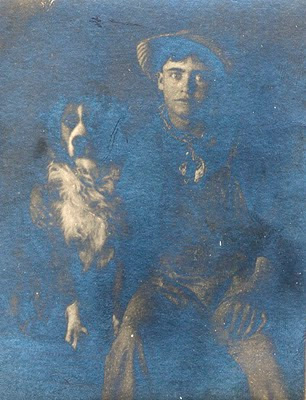 19.  Many an old silver print has been “ruined” by silvering, but sometimes the effect is quite beautiful. Here’s a young cowboy and his dog. There’s lots of silvering, which shows up blue in a scan. The image is underexposed: possibly in a studio, but I like to imagine that they’re sitting by a campfire. The sidelighting is evocative. 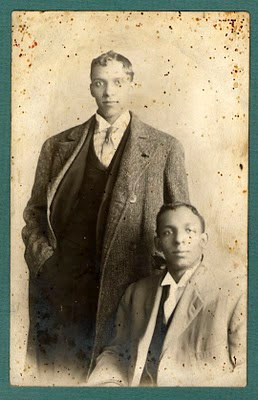 20.  Insect damage can take several forms.  Here’s an example of an RPPC damaged by flyspecks. I often see this kind of damage on images of African Americans.  I hope these two well-dressed, self-possessed boys did well in life despite thousands of small slurs and setbacks. 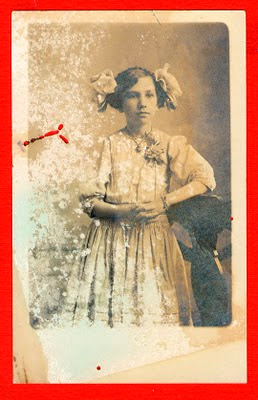 21.  Here’s another RPPC with insect damage. Not only have insects nibbled off much of the surface of the photograph, leaving a lacy effect, but they’ve tunneled right through the card (and possibly through other photographs in a stack). I gave this one a red backing so you could see the insect holes. Often insect holes are perfectly round (see hole at bottom), as if made by a tiny hole-punch. 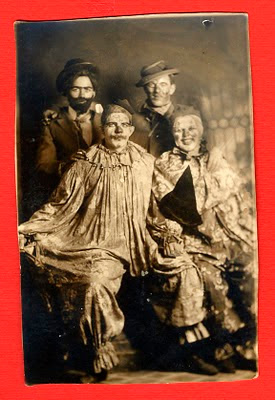 22.  Trimming counts as damage, but I love this RPPC image and I also love that someone else appreciated it enough to trim it to fit in a frame. 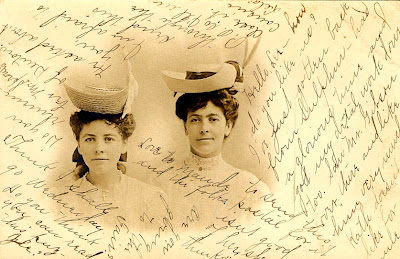 23.  This RPPC  has an undivided back, so it’s from before 1907 when, by law, only the address could be written on the other side. This meant that the message, if any, had to go on the picture side. Sometimes people came up with creative designs for their message, so as not to obscure the photograph. This arrangement of writing gives an almost woven effect. 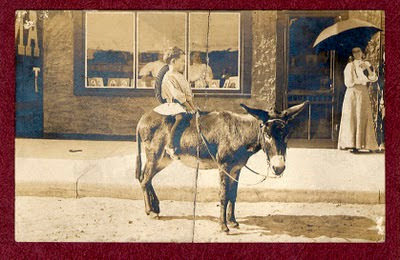 24.  This RPPC was torn right in half when I bought it. I love the little tableau it shows. The donkey is glaring at the photographer; the boy is pleased as punch; the mother is proudly looking on from the doorway; and inside the shop window, behind a row of sample cabinet photographs, two women are watching the entire proceedings.
So: What condition is your condition in?  Writing these posts has made me examine my collection in a new way.  Don’t  waffle about buying a great photograph just because it has damage. And keep your eyes open for images with condition issues that actually enhance them.