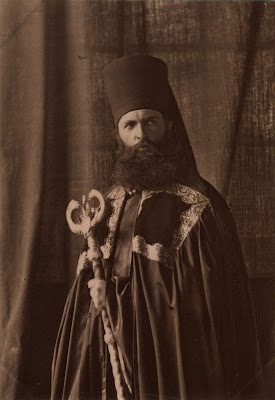 When my parents and I were in St. Petersburg in the spring of 2001, my dad suggested that we try to find William Carrick’s studio at 19 Malaya Morskaya (Petite Morskoi). The street is still there, of course, in the very center of the city near St. Isaac’s Cathedral.  We found the probable building and snapped a few photos out front and in the much older looking courtyard. I’d known about Carrick for quite a while and was working on my senior thesis on Russian photography and empire. Thanks to Carrick’s work, I could picture the late imperial population that used to stream by his door.  Carrick would pick his subjects out of the crowd, enticing them with a free photo and probably a cup of tea. His photos show all classes of Petersburg - the droshki driver, the babushka selling apples, the fighting street urchins, the young nun, the Sultan (what I call him), and the Imperial Guard. Contemporary reviews heralded Carrick’s photographs as capturing the true Russian, as an educational tool and as artistic gems. 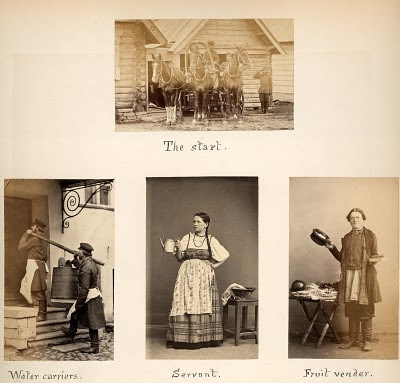 Years before our visit I had bought my first Carrick photos at Brimfield (with my dad’s help) in the form of a little souvenir book of 18 hand tinted cartes de visite picturing various of his Russian types.  Before that long-ago Brimfield, friend had sent me an article about Carrick soon after I started studying Russian. His note said something like, “You should collect these. No one else does.”  Of course, with Russians now avidly collecting their heritage, that’s no longer true.  I’d like to give a brief Carrick introduction here, along with examples of his work drawn from my collection. 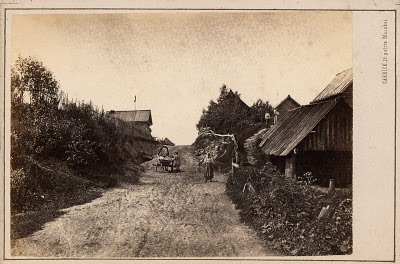 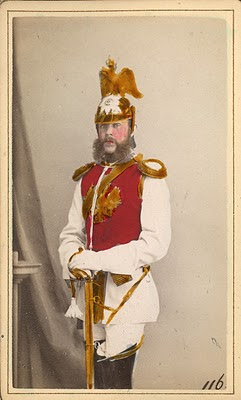 William Carrick was born in Edinburgh in 1827.  Soon after he was born, his parents moved to St. Petersburg.  His father and grandfather were timber merchants and Carrick lived nearly all of his life in Russia.  Eschewing the family business, Carrick decided to be an artist and studied architecture at the Academy of Arts in St. Petersburg.  In 1853, he went to Rome to build a portfolio.  Soon after returning to Russia, he escorted his younger siblings to Edinburgh, where he met his future photography partner, John MacGregor.  In 1859, they opened a studio in St. Petersburg.  As far as I’ve been able to tell, Carrick only made paper photographs, although he could have experimented with other mediums and most definitely met photographers in his time in Europe. 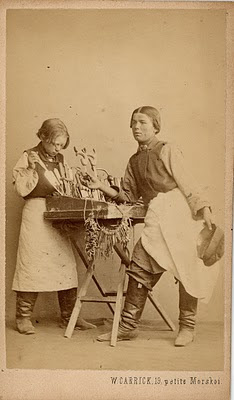 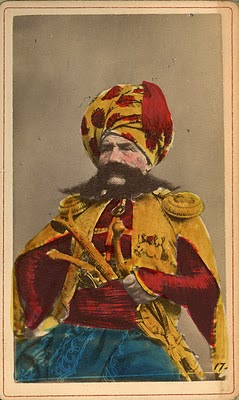 In 1859, St. Petersburg was the seat of the monarchy and the social center of the Empire. Tsar Alexander II’s reign brought the Great Reforms, including the emancipation of the serfs in 1861. In 1859, Scotland’s Astronomer Royal visited Russia and noted, “there is scarcely a more frequent sign to be met with along the principal streets, than PHOTOGRAPHER; and all the specimens...were among the finest things we have ever seen in that line.”[1] Carrick hoped to be a portrait photographer, but met with much competition in this regard and his mother wrote letters attesting to his struggles.  Carrick turned to copy work and began to photograph the myriad of people that appeared outside his door, the Russian types for which he is now best known.  Carrick wrote that some of his subjects “were so unaccustomed to scientific manipulation that they expressed great alarm at the operation...fearing the camera would explode.”[2]  Carrick’s photographic types were soon receiving praise from the royal family and, as their presence in European and American albums attests, from tourists and members of the upper classes. 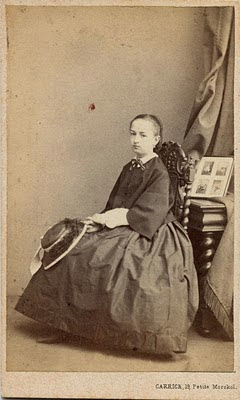 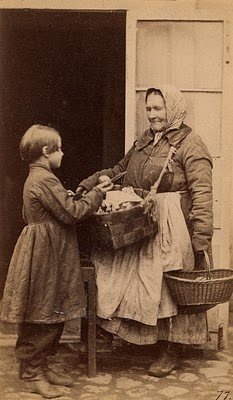 Carrick and MacGregor did not only stay in the studio. In their cabinet cards and CDVs, there is a sampling of outdoor work throughout the city.  In the 1870s, the pair traveled around European Russia photographing people and places. Today, these images are often mounted into albums or found as loose albumen photographs.  While many of Carrick’s images have been published thanks to the diligent work of his great-grand niece Felicity Ashbee (daughter of artists CR and Janet Ashbee), it is sometimes difficult to attribute his work due to many imitators.  His negative numbers in the types are often a start at attribution as are his studio sets, various props and the style and artistry that runs through his work. 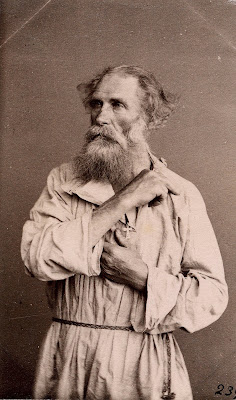 I’ve always thought that Carrick’s work has a directness other typographic photographs lack.  He seems to have made true connections to his subjects and did sympathize with the plight of the lower classes in Russia, even to the point of being more progressive than the norm.  In 1868, he married a member of St. Petersburg’s radical intelligentsia, Alexandrina Markelova, and only told his family several years later. He maintained ties with the Academy of Arts and his work aligns with that of the realist artists in Russia, like Ilya Repin and Ivan Kramskoi.  Carrick’s subjects pose but they also fool around, they laugh, they smile and all look alive.
Illustrations
1.  Probable self portrait as Orthodox Priest. This is one of those difficult to prove photos, but the        resemblance is uncanny. Loose, about 5 x 7.
2.  Detail from a travel album page, CDV size photos.
3.  Village street scene. Cabinet card.
4.  Boys selling tools, CDV.
5.  Imperial Guard, CDV from Types Russes album.
6.  The Sultan (probably from the Caucuses), CDV from Types Russes album.
7.  Portrait of a girl with sample album, CDV.
8.  Babushka selling apples to a child, unmounted CDV.
9. Religious peasant, unmounted CDV.
10.  Houseboat ?, Cabinet card.
1.  Julie Lawson, "William Carrick: His Photography," in Felicity Ashbee and Julie Lawson, William Carrick 1827-1878 (Trustees of the National Gallery of Scotland, 1987), p. 11.
2.  Felicity Ashbee, "William Carrick: A Scots Photographer in St. Petersburg (1827-1878)," History of Photography, July 1978, p. 211.
You can see some of Erin's photos for sale here www.finedags.com, and on eBay as Fotographiya.
For more information on Erin Waters, click here.